Skip to the content
Home > Insurance Blog > So, your house was swallowed by a sinkhole? Shifting ground part 2

So, your house was swallowed by a sinkhole? Shifting ground part 2

Homeowners must consider all potential hazards in order to make sure their home has comprehensive insurance. One rather unusual and difficult to detect hazard is a sinkhole. The United States Geologic Survey (USGS) defines a sinkhole as “a depression in the ground that has no natural external surface drainage.” Basically, this means that when it rains, all of the water stays inside the sinkhole and typically drains into the subsurface. Sinkholes do not happen often, but when they do occur, the damage is often extensive. For example, the below photo is from a sinkhole that occurred at a mobile home park in Tallahassee, FL. It may be hard to believe that, in most states, homeowners insurance does not protect property owners from structure damage associated with sinkholes. In this article, we look closer at the risk associated with sinkholes as well as how to obtain sinkhole insurance.

Where sinkholes may occur

While individual sinkholes are very difficult to detect, the geologic conditions that lead to potential sinkholes are present in certain parts of the US. The below map from the USGS identifies the areas with Karst landscapes as well as more salt and gypsum rock. According to the USGS, about 20 percent of U.S. land is susceptible to sinkholes. The most severe damage from sinkholes typically occurs in Florida, Texas, Alabama, Missouri, Kentucky, Tennessee, and Pennsylvania. Sinkholes mainly occur when water drains or is directed below ground. Sinkholes then form when the water interacts with subterranean caverns, particularly in areas with water-soluble rock. Sinkholes often form following earthquakes, floods, or even droughts. Below is a picture showing how a sinkhole forms. Sinkholes can be anywhere from a few feet wide and deep, to over 2,000 feet in diameter and depth. The largest sinkhole in the U.S. is the Texas Devil’s Sinkhole in Rocksprings, TX, which has a 50 ft. wide opening and drops 350 feet into the ground. 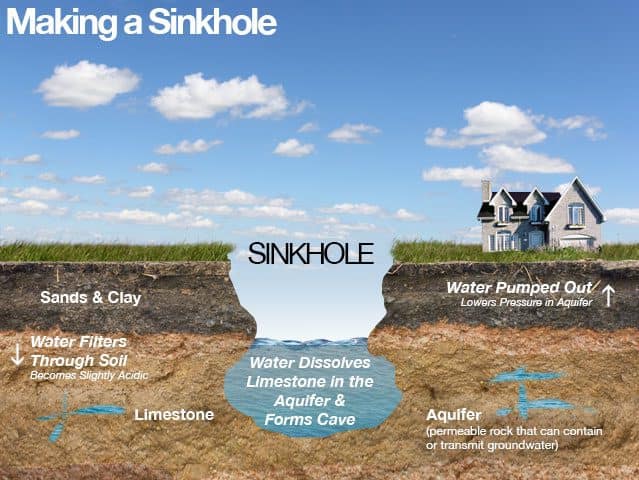 Only two states, Florida and Pennsylvania, mandate that insurers offer homeowners the ability to purchase sinkhole insurance. Due to the prevalence of sinkholes in these two states, this insurance is usually very expensive and requires a geological survey prior to binding coverage. Homeowners may purchase a sinkhole coverage endorsement in other states as well, but insurers do not have to offer it. When a homeowner purchases a sinkhole endorsement, it usually takes the form of either a sinkhole insurance endorsement or a catastrophic ground cover collapse coverage endorsement. A sinkhole endorsement covers structural damage to the covered building, including the foundation, caused by sinkhole activity. Contents coverage and additional living expenses apply only if there is structural damage to the covered building caused by sinkhole activity.  A catastrophic ground cover collapse endorsement only responds if all of the four below criteria occur.

Obviously, this is a very high standard. A home may incur devastating damage, but if the government does not condemn the structure, then the policy will not respond.

Homeowners need to know the sinkhole risk associated with the location of their home and then make a wise decision as to whether or not they should purchase an endorsement to help hedge against a potential sinkhole loss.