Hurricane Michael developed into a Category 5 storm on October 10, 2018, and made landfall near Mexico Beach, Florida, in the Florida Panhandle. Michael had wind speeds that just recently confirmed it as a Category 5 storm, which is likely the strongest hurricane to ever hit the Florida Panhandle and could be the strongest to come onshore in that region since Hurricane Dennis in 2005. However, less than a week before the storm made landfall, few forecasters expected it would become a major hurricane. As a result, there was limited time available for response and recovery planning. In order to learn from this event, all stakeholders should consider the factors leading to the increasingly destructive nature of recent hurricanes. It is also necessary to review the impact, response, recovery, and aid available to communities following this type of storm. Homeowners, insurers, governments, claim adjusters, and company executives must learn from this event in order to be better prepared prior to the next hurricane season.

Americans love the coast. Despite the risks associated with hurricanes, Americans continue to flock to coastal communities. In fact, according to the Census Bureau, as of 2016, over 94 million Americans lived in a county directly adjacent to the Atlantic Ocean, Pacific Ocean or the Gulf of Mexico. This represents about 29% of the population. Further to this point, the population of coastline counties in the Gulf of Mexico region increased by more than 3 million people, or 24.5 percent, between 2000 and 2015. This represents the fastest growth among coastline regions in the country. In contrast, during the same period, the United States as a whole grew by 14.8 percent. As populations increase in coastal communities, the potential cost associated with a loss in the area also significantly increases. This reality, unfortunately, was evident during Michael. 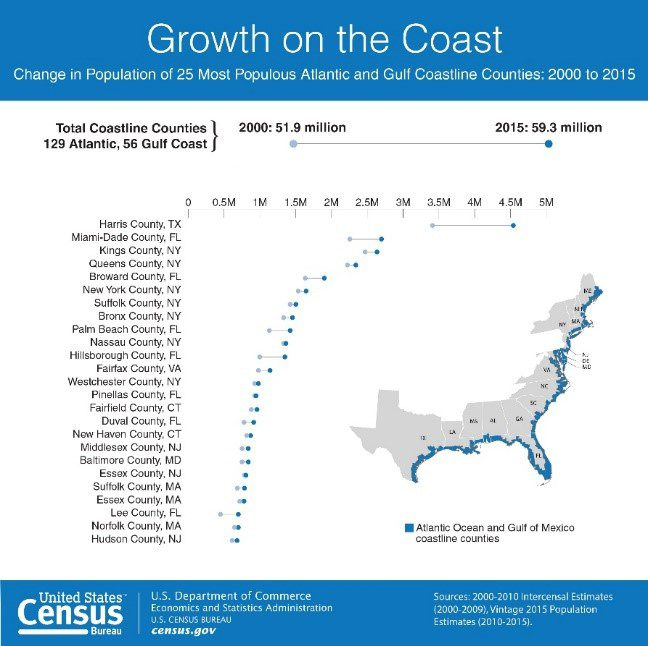 Another evolving risk involves climate change. The debate remains about the cause of climate change, but weather data provides ample evidence to support the reality that the climate is changing.  Prior to Michael, the waters in the Gulf of Mexico were 3 to 5 degrees warmer than usual, putting the water temperature around 85 degrees compared to 80 degrees, which is the typical temperature that time of year. The warmer water supplied a significant fuel source necessary for Michael to develop quickly. In fact, the warmer water allowed Michael’s winds to increase by 45 miles per hour in 24 hours and ultimately increased by 80 miles per hour in just 48 hours prior to landfall (between Monday and Wednesday). This “rapid intensification” occurs when winds increase by at least 35 miles per hour in a 24-hour period. Rapid intensification makes predicting hurricane impact difficult for forecasters as well as the various authorities responsible for evacuation, response and recovery planning. Regardless of the reason for the warmer water, rapid intensification was evident in five of the most recent strong hurricanes during 2017 and 2018. 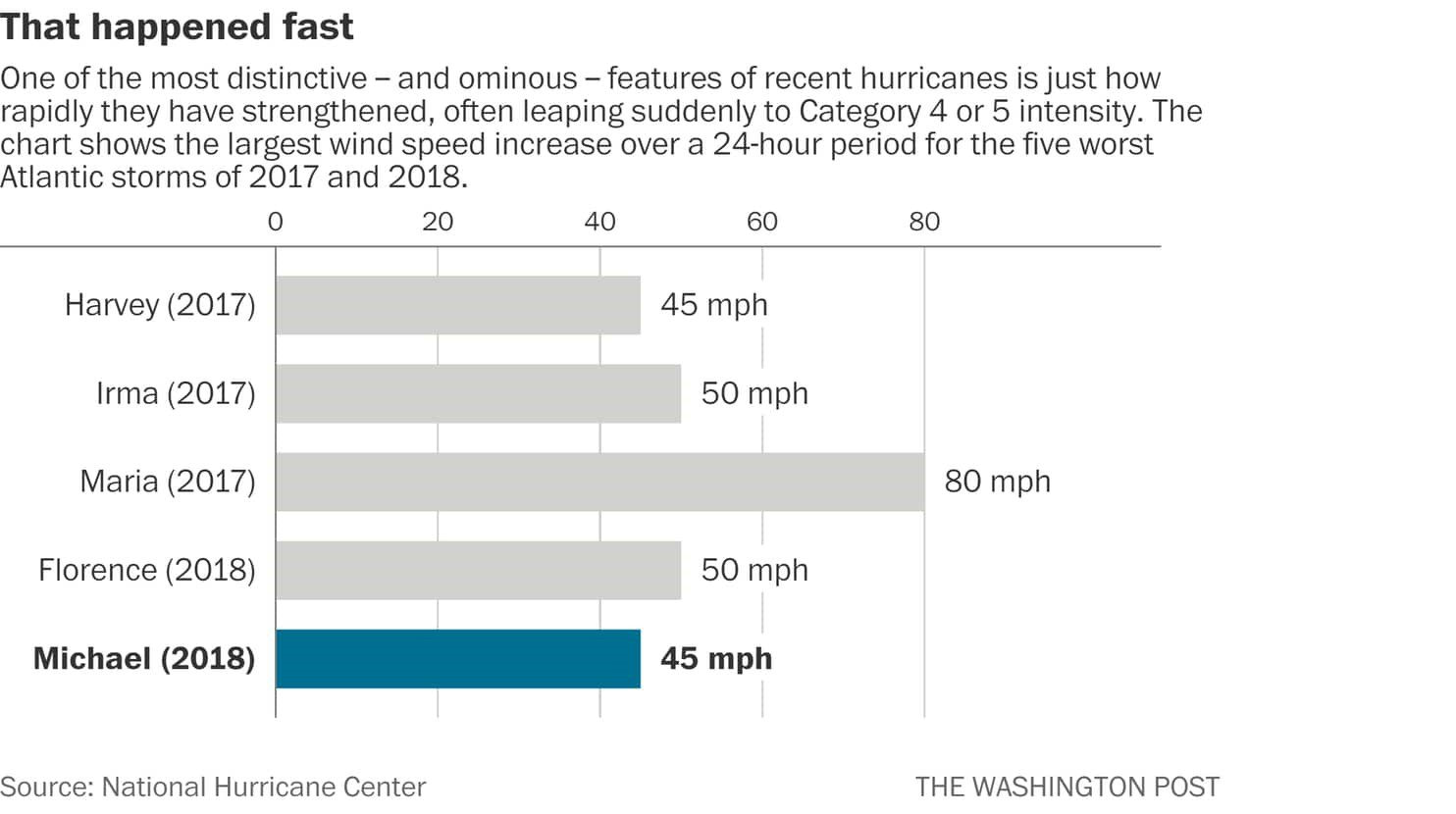 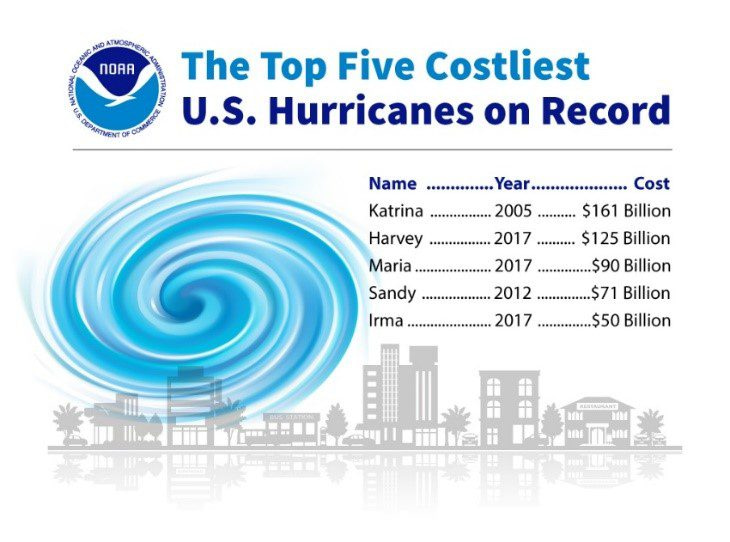 In order to understand the destructive nature of Michael, it is important to understand the specific impact of this storm on the Florida panhandle as well as the related need for aid. One factor involves understanding wind damage vs water damage. With a significant wind and storm surge event such as Michael, whether or not a property sustains damage by wind or water (i.e. storm surge) can be an important issue. Most property insurance and business interruption policies include coverage for windstorm losses, but often exclude losses associated with flooding or rising water. Loss causation is often difficult to determine in a category 4 or 5 storm. For example, the wind may weaken the wall of a structure and then once storm surge approaches the same wall, it provides enough additional weakening such that the structure buckles at its foundation. When property insurers deny coverage for these claims, it becomes even more critical for aid and recovery planning to assist communities as they rebuild. 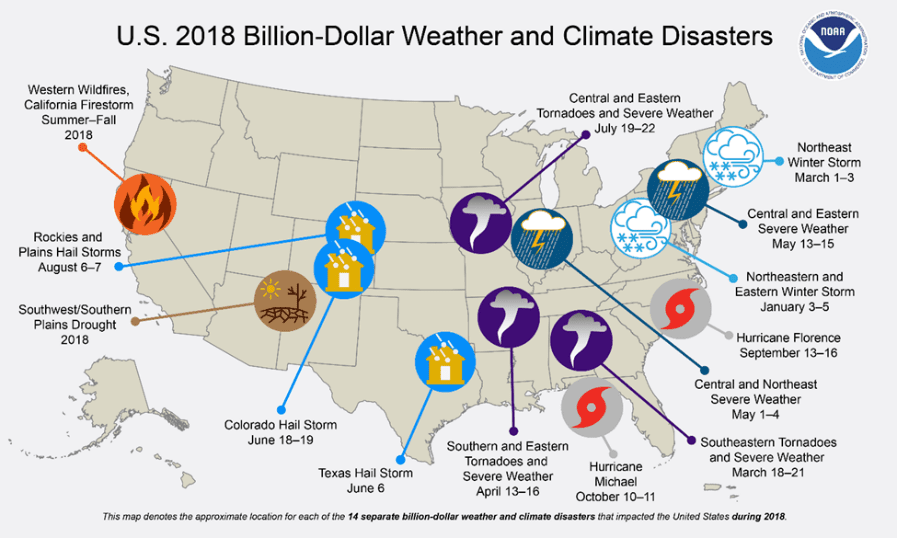 This leads to the next factor, which is the difficulty involved in displaced families finding alternative places to live. In the case of Michael, temporary housing was initially available because of vacation rental properties in nearby communities. As time progressed, however, and the spring vacation season approached, an increase in housing rates associated with the seasonal demand change led to unaffordable temporary housing for displaced victims of this storm. Therefore, aid is critical for these communities so that victims can afford reasonable and healthy temporary housing until they are able to rebuild and recover.

In a similar vein, the communities around the panhandle have also sustained a direct hit to their real estate values. This is the result of a “stalled market” commonly expected to follow a significant hurricane. Sellers end up having to delay the sale of their home and often incur a reduced sales price once the home sells. The good news is that home prices tend to recover in the long term, once the community recovers and inventory and demand are able to stabilize. Even so, it is important to emphasize the need for aid in helping damaged communities recover so that the real estate market is not hurt on a long-term basis.

Many factors influence aid availability following a major hurricane. These include the scope, displacement, timing, and location of the disaster. While Michael was a major hurricane when it made landfall, it did not directly affect a large metropolitan city such as Tallahassee or Tampa. Therefore, the national attention granted to the communities impacted by this storm was limited in the weeks following the event. In contrast to Michael, other recent storms (Florence, Harvey, and Irma) each received significantly more aid than Michael did, even though the damage involved in Michael was higher than that of Florence. The impact to the City of Wilmington in North Carolina led to Florence attracting more attention and ultimately more aid than Michael received.

Despite the challenges faced by the panhandle communities damaged by Michael, they will recover. Michael, along with the other recent strong storms, present opportunities to learn about the changing landscape of risks associated with future storms as well the need to for aid. Perhaps the most lasting potentials destruction from a major hurricane results from stakeholders failing to make necessary changes to be better prepared for the future.